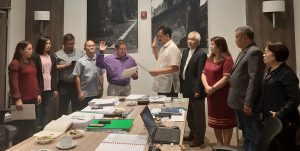 By virtue of his election as president of the Faculty and Employees Federation, Inc. (FEFI), Prof. Samuel G. Arsulo now serves as the new faculty regent of the ISAT U Board of Regents (BOR), the university’s governing body. He took his oath of office during the BOR second quarterly meeting held at Seda Hotel, Iloilo City on June 26, 2019.

Upon assumption of office, his key areas of concern are the retirement (Pabaon) package for the FEFI members and the revisit to the Collective Negotiation Agreement (CNA). Also in the priority list of Prof. Arsulo is the review of Equivalent Teaching Unit (ETU) and the exploration of the faculty’s freedom to spend the extra 2 hours of the 8 hours they spend in school, which is beyond the daily actual contact time of 6 hours.

An alumnus of ISAT U, then Western Visayas College of Science and Technology (WVCST), Professor Arsulo started his career with the University on September 11, 1991. After 28 years of service, he attained the academic rank of Asst. Professor IV.

The love for electronics technology runs in Arsulo’s blood.  He started his electronics technology education at Don Bosco Technical Institute-Talisay City, Negros Occidental where he spent his high school days. After completing his secondary education, he earned a three-year Technician Diploma in Electronics Engineering Technology at Technological University of the Philippines-Visayas in 1982. Lady luck smiled at him when he found a job at Frabelle Fishing Corporation. One year later, with an ardent desire for a higher education, Prof. Arsulo left his work and enrolled at WVCST.

His track record of being a consistent honor student started in his elementary days.   Because of his intelligence, he was allowed to graduate at Banate Central Elementary School (BCES) at the age of 10. In 1979, Prof. Arsulo finished his secondary education when he was only 14 years old.

He started his teaching career at Banate National High School in 1998. After three years, he returned to ISAT U as an instructor.

His services in the different organization earned him the respect of his co-workers. He was a member of the governing board of the WVCST Alumni Association, Inc., WVCST Laboratory School Parent and Teachers Association (PTA), and the WVCST College PTA. He had been the Board Secretary of ISAT U and Community Multi-purpose Cooperative before  elected as Chairman of the Board of Directors.

He is also known to devout his time in different educational and community associations outside of the University.   Prof. Arsulo has been President of BCES Alumni Association (2004-present); President, BCES PTA (2004-2013) and member of the Municipal School Board of the Municipality of Banate (2002-2003 and 2005-2012). He was also actively involved as a convenor of the Banate Anti-Coal Coalition in 2003. which caused the rejection of the proposed coal-fired power plant in Banate, Iloilo. 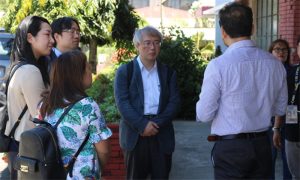 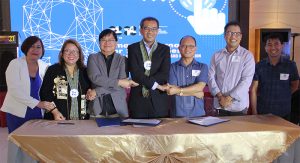 Under the agreement, ISAT U can provide the necessary expertise and facilities needed for the collaboration to complement the PCIEETRD science and technology sectoral plans and programs on its delineated sector which includes Data Science and Smart Cities.

As defined by DOST-PCIEERD Executive Director Enrico C. Paringit, a smart city harnesses the use of science and technology and innovation to deliver good governance and services to be public.

Paringit explained the concept of the portal for Program on Data Science and Good Governance which is also in line with ISAT U’s thrust in research and development, and computer studies. “They (ISAT U) will have to train a pool of students and people working at the local governments in order to apply data science techniques”.

DOST Region VI Director Rowen R. Gelonga added that the purpose of the collaboration between DOST and ISAT U is to create a pool of experts on data science or data analytics.

Gelonga also passed on the challenge to ISAT U to probably open degree programs or even post-graduate programs related to data science, which is a multi-disciplinary field that uses scientific methods, processes, algorithms, and systems to extract knowledge.

The MOU was signed by Engr. Gelonga, Dir. Paringit and ISAT U President Raul F. Muyong was held during the ninth anniversary of DOST-PCIEERD held for the first time in Iloilo City on June 13, 2019. 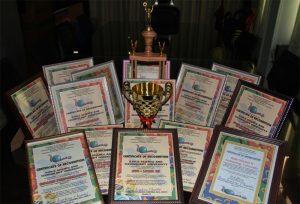 The Commission on Higher Education (CHEd) Regional Office 6 recognized the  achievements of  Iloilo Science and Technology University (ISAT U) during the Commission’s 25th Founding Anniversary on May 18, 2019.

Aside from being recognized as a state university with a Level III status, the University was awarded for having the most number of certificate of program compliance (COPC) and  the most number of accredited programs of  a higher educational institution (HEI) in Western Visayas . The recognition for having the Excellent Environmental Education Program and Excellent Gender and Development Program was also given to ISAT U.

The University was also awarded as the HEI with the 7th Highest Number of Board Passers in Region VI and with Board Topnotchers for the past five years.

The College of Education as a Center of Development was also acknowledged.

As to student services, the University was adjudged as the CHEd-Friendly HEI in the Implementation of STUFAP, UNIFAST and other related programs for tertiary students.

The Commission likewise gave commendation to the State Universities and Colleges Association of Tourism and Hospitality Educators of the Philippines (SUCAHTEP), a national association initiated by ISAT U instructors.

In the Exhibit Contest participated by HEI in Western Visayas, ISAT U displayed the University’s profile, achievements in research and in specialized fields in science and technology. Though declared as second runner-up by the judges, the booth of ISAT U romped off with  the People’s Choice Award. It received the most number of stickers showing the audience’s preferred exhibit. ISUY and an unmanned robot was an attraction that also showed ISAT U’s focus on robotics.