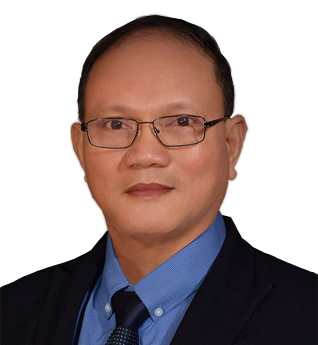 Dr. Raul F. Muyong, ISAT U President, was elected as member of the 11-man Board of Trustees of the Accrediting Agency of Chartered Colleges and Universities of the Philippines (AACCUP) during the 30th AACCUP Annual National Conference held at the Century Park Hotel, Malate, Manila on February 15-17, 2017.

The 11 Trustees for 2017-2019 were elected from three (3) Categories: Category I (Presidents/ Vice Presidents/Chancellors), Category II  ( Deans/Directors) and Category III (Faculty).

Other elected Board of Trustees are as follows: 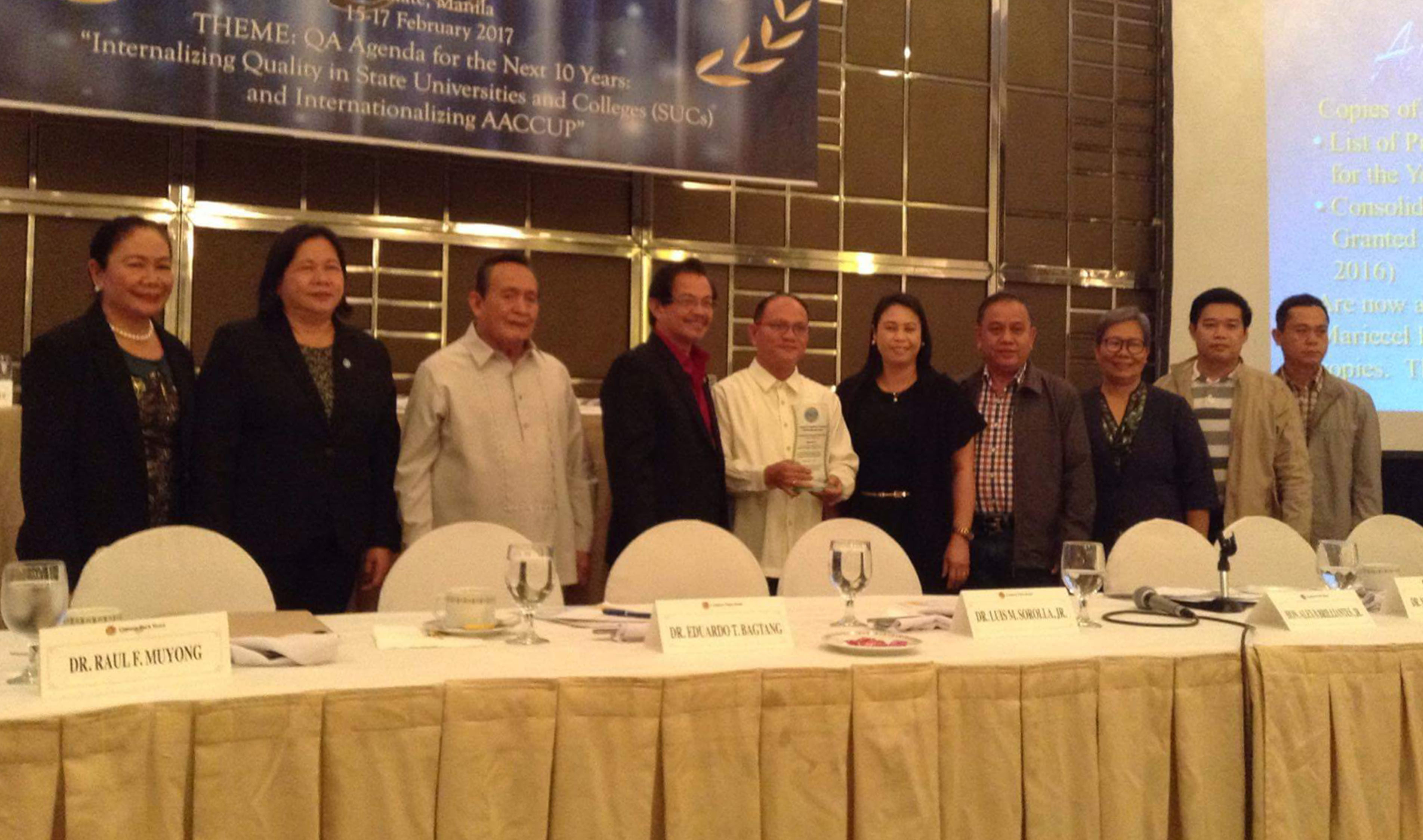 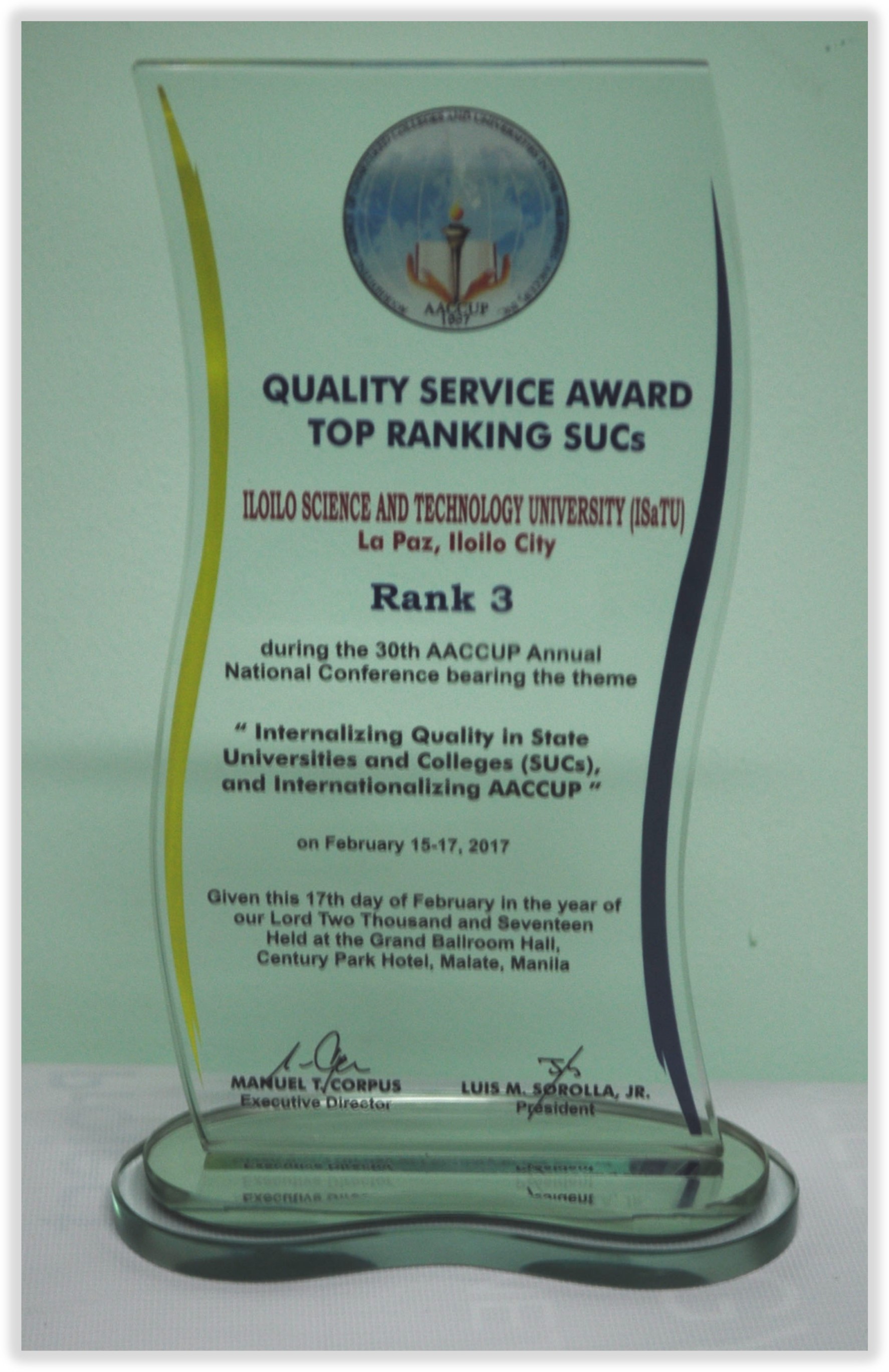 ISAT U garnered a total of 92 points in the following criteria: (1)  Accredited Programs, which includes the level of program accreditation (from Candidate to Level IV and to Institutional) and the number of accredited programs per level; (2) cooperativeness in sending accreditors during survey visits; (3) Internal Quality Assurance Unit whether it exists as a task force, formally organized, with staff, budget, and special orders; (4) participation to AACCUP Trainings, the number of participants and the frequency; (5) participation of SUC to the Mid-Year and Annual Conferences; (6) awards as Top 10 for the past 5 years as to the level of awards.

The criteria for the mentioned awards were approved by the AACCUP Board per Resolution No. 097, s. 2016 during its meeting held last December 16, 2016. 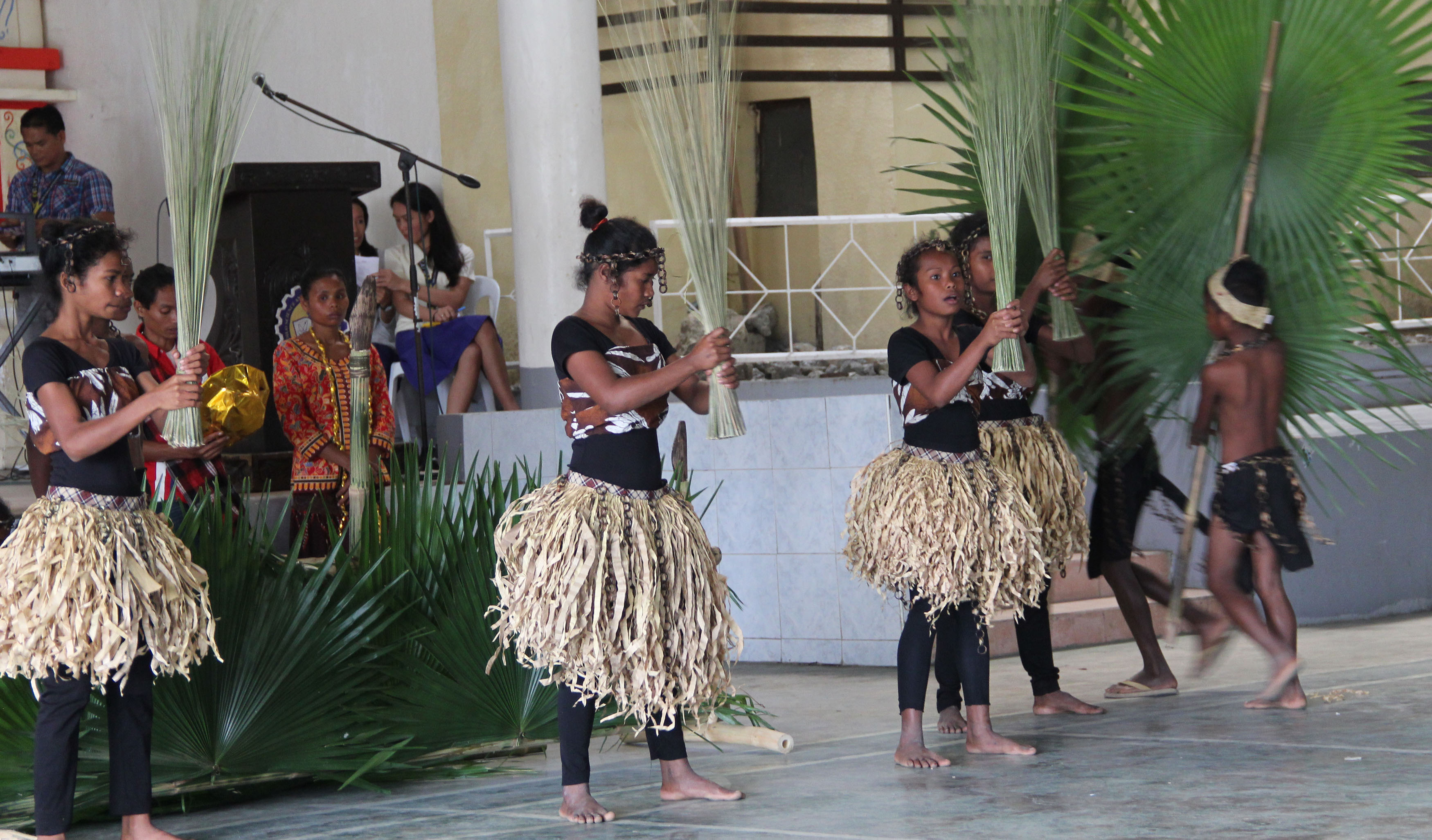 The Atis from Leong, Cabatuan and Lanit, Jaro settlement areas did not only entertain but educate the crowd in their cultural presentation during the outcome-based education (OBE) learning activity of the Literature class held at the Multi-purpose Covered Gym on February 14.

Tribu TLOD (Tribal Leong Organization Development) from Cabatuan, Iloilo entertained the students and faculty through the display of their rich cultural heritage. A vocal solo in indigenous Ati language gained tremendous applause from the audience as the native did good not only in singing but also in beatboxing. TLOD shared their culture in a tribal dance depicting their nomadic lifestyle- hunting, mat weaving, broom-making and other native way of life of an Ati. The spears, bow and arrow and other native ornaments used by the Atis were a good learning tools for the students. 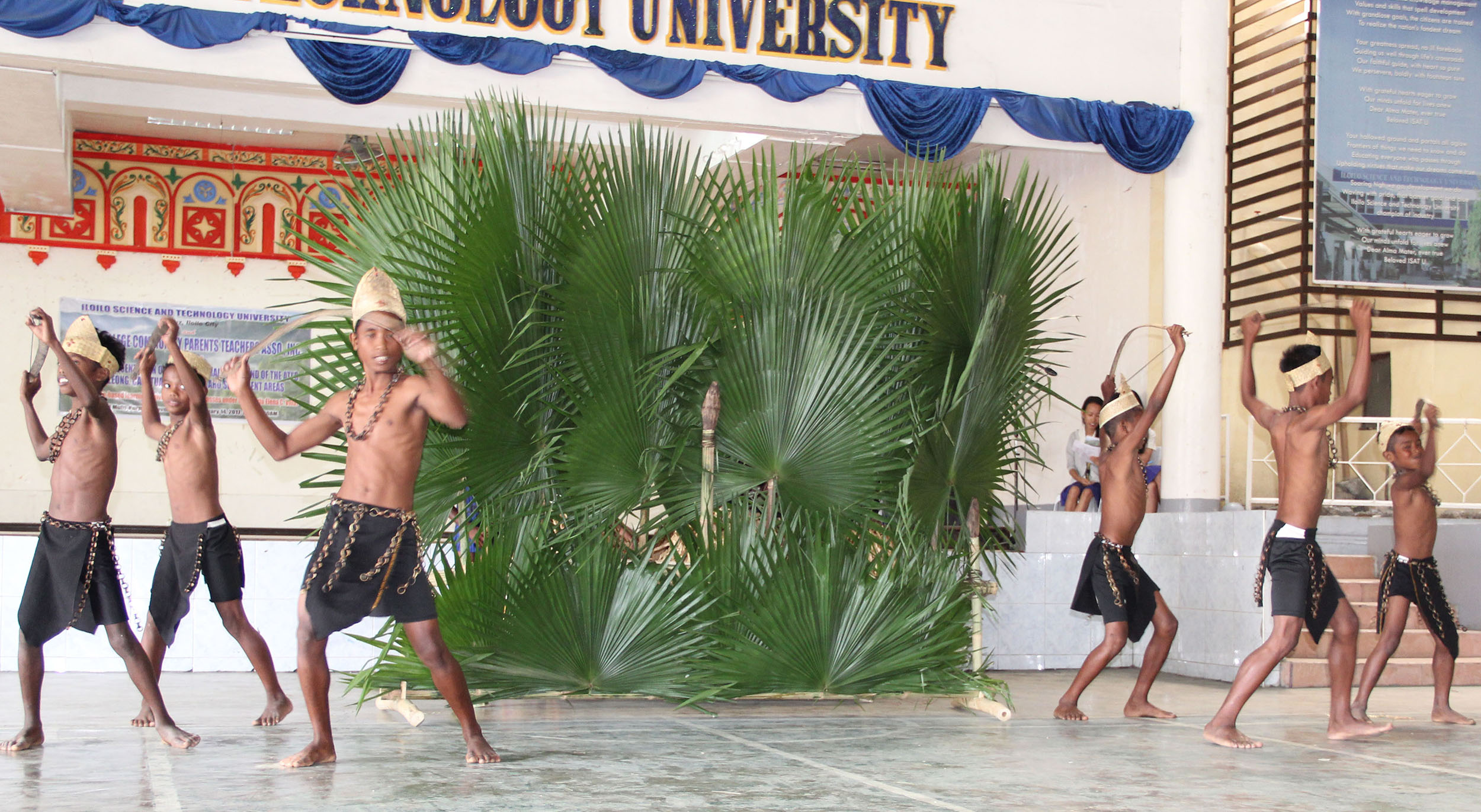 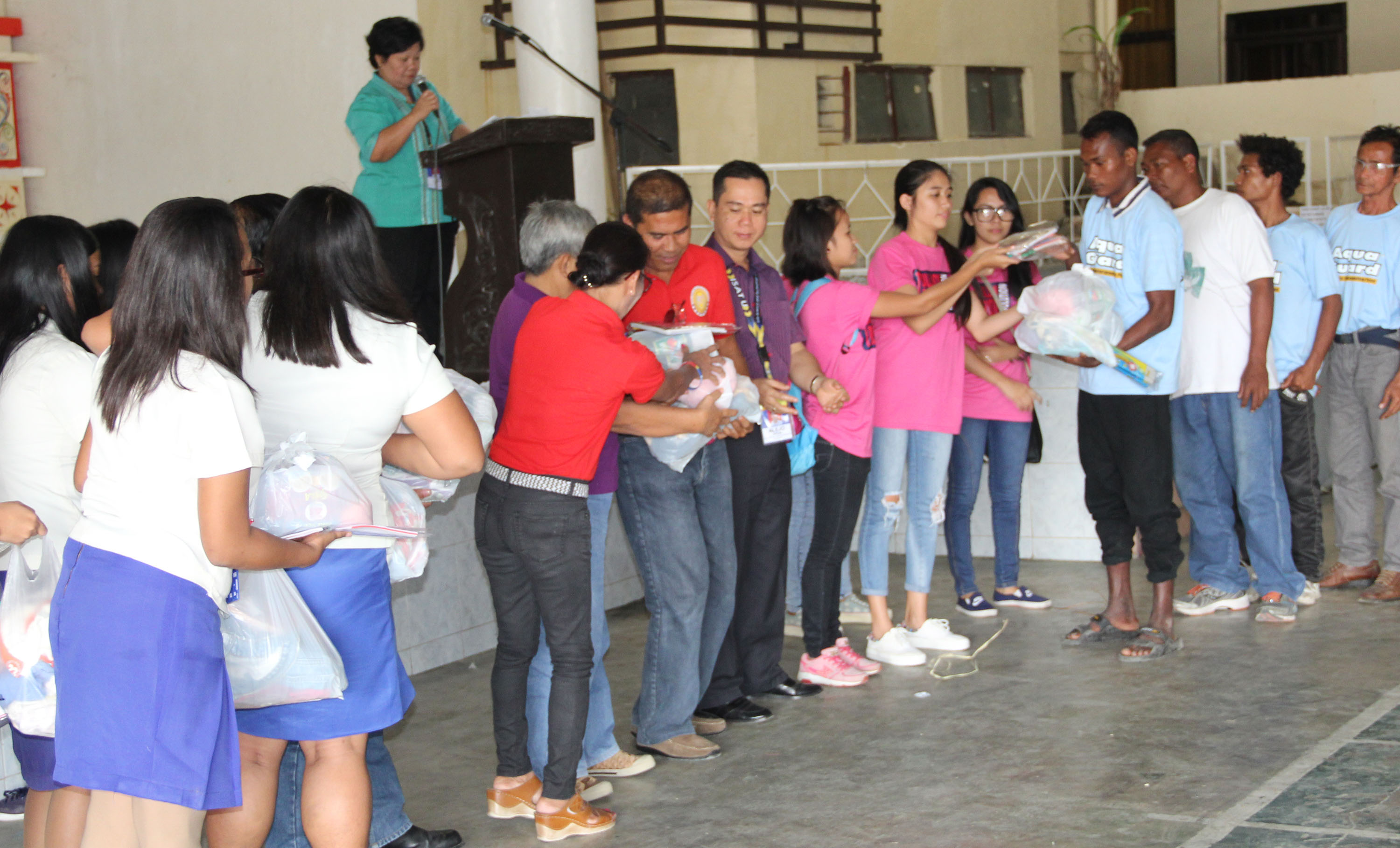 As part of the activity, the students initiated a gift giving activity to 50 Ati families who received slippers, used clothing and grocery items.

University president Dr. Raul F. Muyong presented the Iloilo Science and Technology University 2016 accomplishments, 2017 targets and 2018 outlooks during the Consultation with Stakeholders and 2018 Budget Preparation on January 31, 2017 at the EdTech Center. 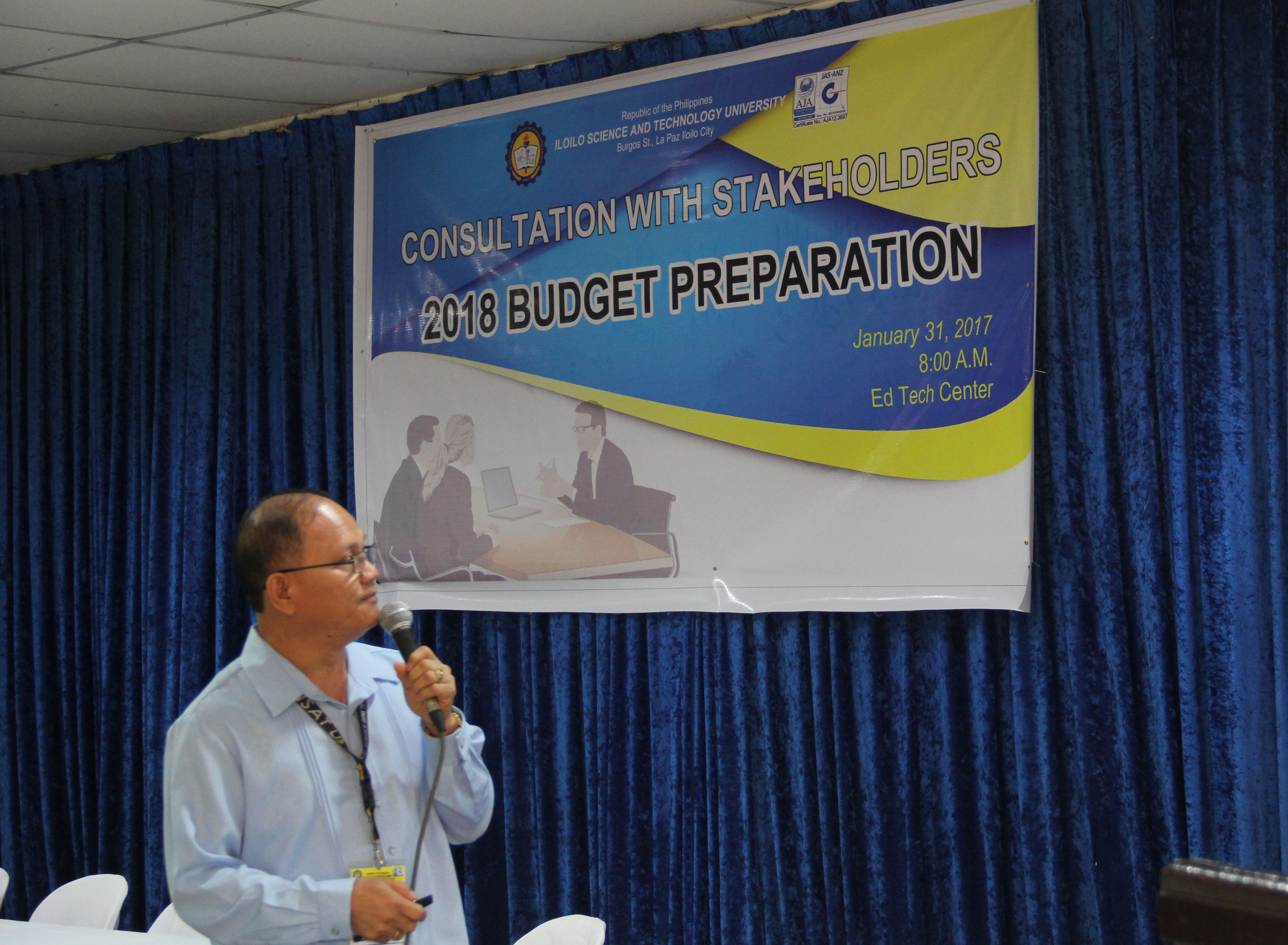 In the main campus, Dr. Muyong reported that 20 million was already exhausted in 2016 for the Phase I construction of the Research Hub. An additional 25 million pesos for the Phase II of the construction is included in the 2017 target. The 60 million Research Hub is the landmark for ISAT U research development activities. The Science and Technology Building or N Building was allocated 24 million pesos for 2017 budget for the second phase of the construction. Dr. Muyong said that upon its completion,  the building will be used for the Teachers Education program and the building that will be vacated by the College of Education will be used by the College of Arts and Sciences. This is to establish a facility or structure for every colleges. The students applauded when it was announced that classrooms in the N Building will be equipped with a built-in projector.

For the external campuses, the 16 million pesos budget from the Senate was used to construct the academic building in Dumangas Campus and the Barotac Nuevo Campus.  For Leon Campus, the phase II rehabilitation of library and the two-classroom one storey buiding in Miag-ao campus.

Other facilities completed in 2016 was the motorcycle pavement park at the New Site, renovation of the Science faculty room, repair perimeter fence, students’ promenade and the bench on the ICT covered walkway.

Dr. Muyong presented to the stakeholders the Government Quality Management Committee award given to ISAT U for being ISO 9001:2008 compliant in education services including academic program and general administration.

Included in the target for 2017 is the 15 million pesos access road intended to connect the two campuses. A bursts of applause followed after Dr. Muyong emphasized that the perennial problems of flood will be solved.

The phase I of the construction of the University new multi-purpose gym is scheduled for 2017. The 5 million pesos facility for all physical education activities will be constructed away from the classrooms to avoid disturbance of the on-going classes.

The completion of the HRT building in Miag-ao campus is also included in the priority list. Seven million of the 10 million budget is allocated  for the structure’s completion. Dr. Muyong explained that the facility will feature a conference hall at the third floor, rooms for accommodation in the second floor and a laboratory for the HRT program in the ground floor. A fitness gym that will be put up in the school open field will be started this year with an allocation of 1.5 million pesos. 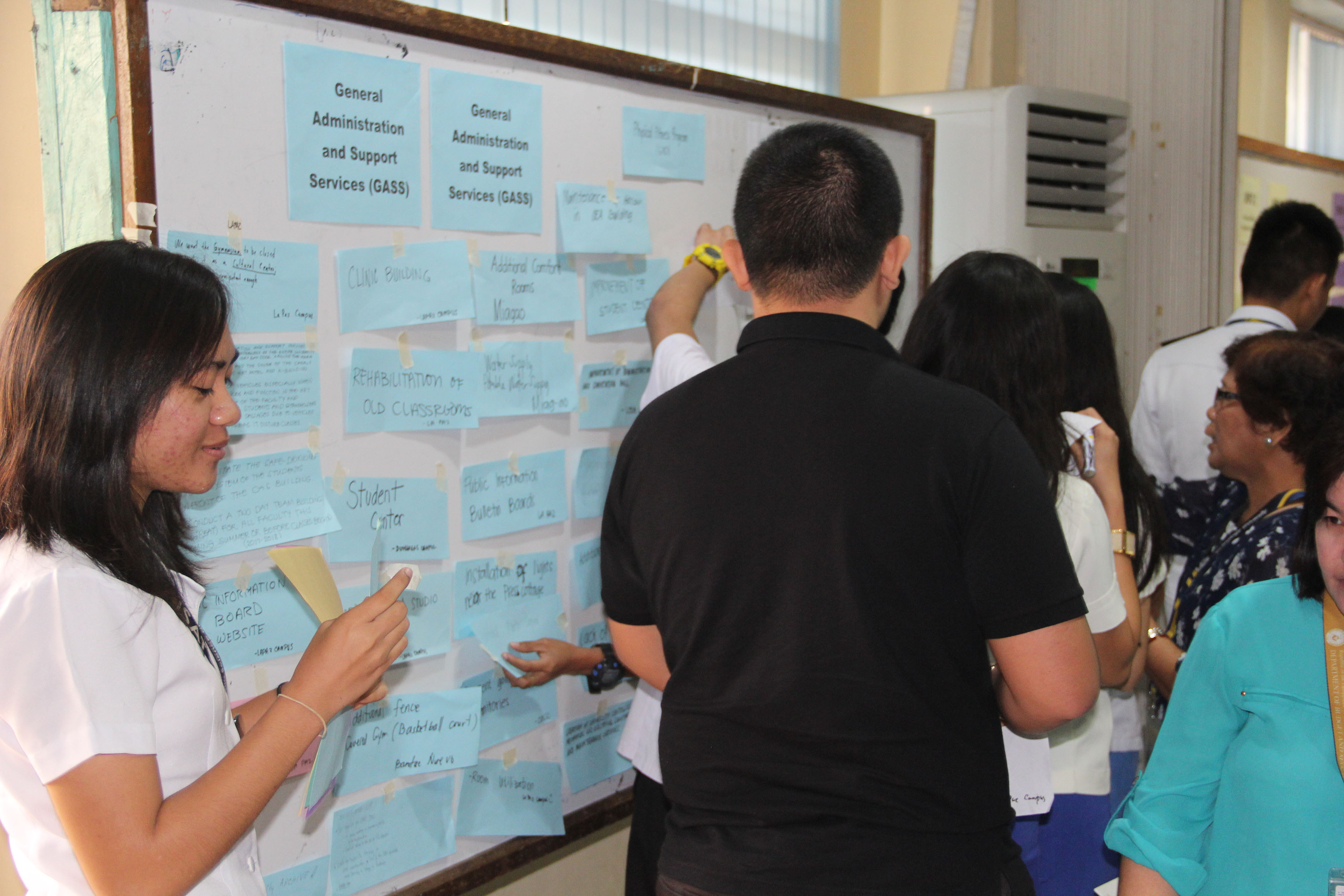 Part of the Consultation Meeting with Stakeholders is the posting of different concerns and suggestions for the administration’s best services.

The outlook for 2018 includes the completion of the Technology and Livelihood Education Building at the La Paz Campus and the Multi-purpose Gym at the La Paz and Miag-ao Campuses; construction of a three-storey technology building in Miag-ao Campus to accommodate more enrollees and new administration building at Dumangas Campus.

For the auxiliary services, the repair of comfort rooms for the Marine Engineering and TEB and repair of the Registrar’s Office were accomplished in 2016. Dr. Muyong appealed to the students to be responsible in using the comfort rooms and other facilities.

The Students Services Center which was initiated and proposed by Dr. Raul F. Muyong is another outlook for 2018. The facility is a one-stop-shop from examination to graduation under one roof to be put up in the New Site. It will house the examination center and all academic services and records for the students. The administration building be rehabilitated to give more working area for the Cashier Department and a reception area for the visitors.

Dr. Muyong stressed that the biggest part of the budget is allocated for higher education. However it is expected that the local income will decrease because there will be no first year students. The proposal of a free tuition for next school year was also included but the guidelines for implementation of the program.

The updates of enrollment was discussed. La Paz Campus has 6,000 enrollees; Miag-ao Campus, 3,061;Barotac Nuevo Campus, 677; Leon, 1,090; and Dumangas Campus, 638. For the graduates, La Paz campus has the highest number followed by Miag-ao, Leon, Dumangas and Barotac Nuevo campus. For the performance of the teacher’s licensure examination, La Paz and Miag-ao campuses’ passing percentage is higher than the national passing percentage. Also included are the Rehabilitation of HVAC Refrigeration Room and the BFAT Laboratory and lecture rooms.

For the Instructional laboratories, ICT equipment across campuses were procured in 2016. For the performance target in 2017, Leon campus has 5 million peso for the land acquisition for demo farm and a 1.5 million pesos for agricultural program equipment.

Another target is the revisiting of existing programs aligned with CHED, PSG and DepEd K-12 program and the revision of all programs by 2018.  In this connection, Dr. Muyong announced that his appointment as member of the technical working committee for the above-mentioned program  was renewed by CHED for another year.

Dr. Muyong emphasized that interventions will be made to increase the passing percentage and preparation for the institutional accreditation for AACCUP and the programs for Level 4 accreditation.

For the advance program, the outlook is the expansion of curriculum operation in the college and the publication of the Graduate Studies Handbook.

The University president presented the rundowns of patents and copyrighted, published research and the researchers who were given by USA-STRIDE some privileged to study abroad. Dr. Ticar is in the US for a six months training sponsored by USA-STRIDE. 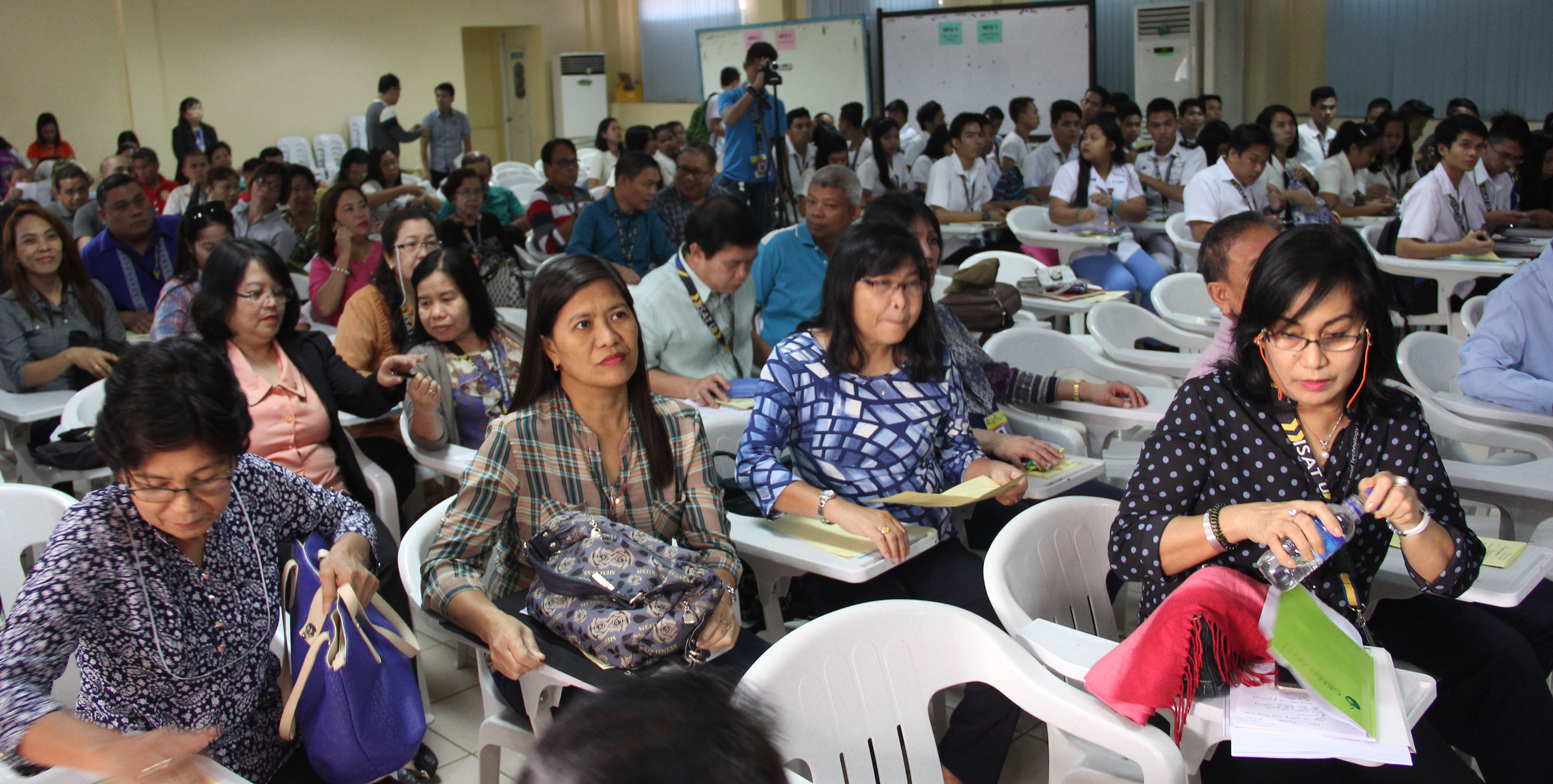 The stakeholders intently listen to the presentation of the accomplishments, targets and outlooks .

A consultation with ISAT U stakeholders and the 2018 budget presentation attended by University Administrative Council, faculty, administrative personnel, members of the Parent, Teacher, Community Association (PTCA), ISAT U alumni and students were held on January 31, 2017 at the EdTech Center.

Mr. Edgar Javeson, Chief Budget Officer, Department of Budget and Management (DBM) Regional Office VI, gave the rationale and objectives of the consultation. He stressed that consultative meeting is centered on the students who are the most important stakeholders and the reason for ISAT U’s 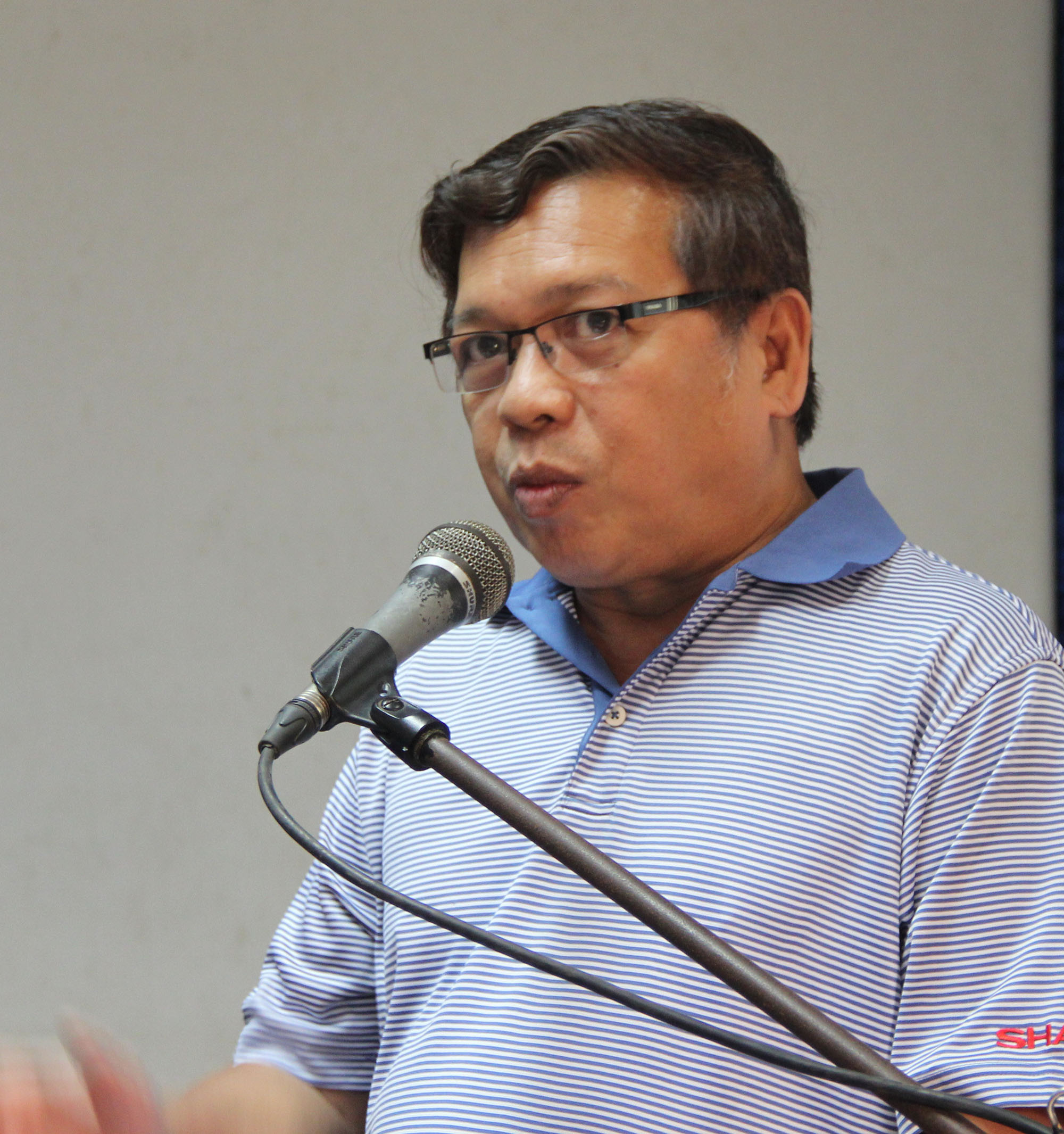 Mr. Edgar Javeson of the Department of Budget and Management.

existence. As to the school administration, this is to give time to report on what has been done and to ask what is to be done for the students. Giving emphasis to the efforts of the present government to provide infrastructure, he asked the students to maintain equipment and the building provided to them. Mr. Javeson also called on the ISAT U administration to go on soul searching for their appropriate role in having a strong and responsive government. He also suggested that the school should carefully study the proposed programs and projects and should be shovel ready- or a linkage between budgeting and planning was set, understand if the proposed budget is higher, lower or equal to the expected output and  consider the school’s absorptive capacity.

Dr. Raul F. Muyong, University President, discussed the annual budget and allocations and the 2016 accomplishments, the 2017 targets and the outlook for 2018 in the general administration and support services, auxiliary services, students services, higher education, advanced education, instructional laboratories  and research services in all ISAT U campuses.

The stakeholders were given a chance to give their recommendations and suggestions and air their concerns in the different service areas through the metacards. 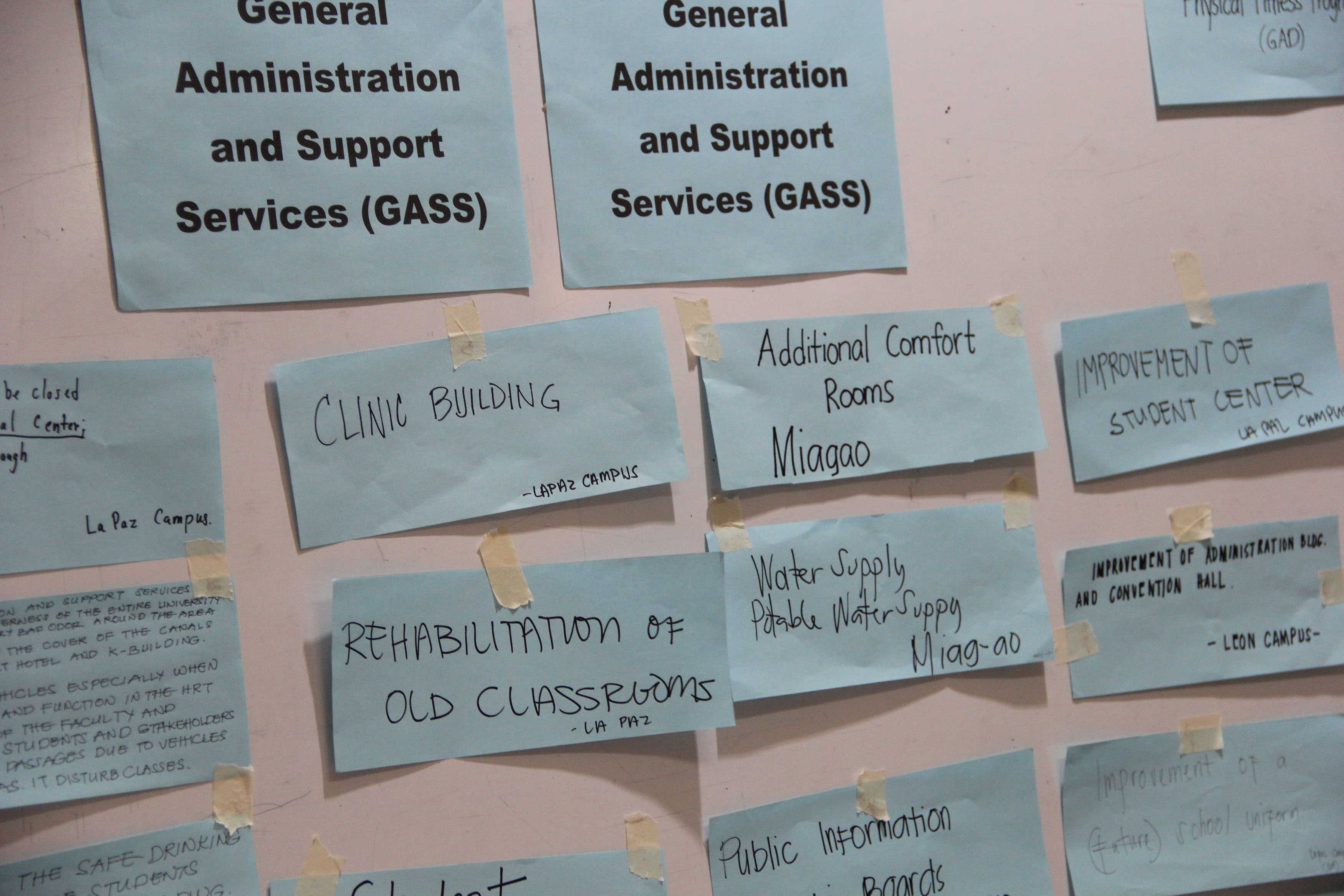 The recommendations of the stakeholders in the different areas of services were written in the metacards.

Dr. Alejo P. Biton, OIC-CAS, presented the synthesis of the outputs of the stakeholders.  These include  (for the Main Campus) the concern on laboratory and equipment , the need for competent teachers, physical facilities, laboratory facilities in the ICT and CIT, the multi-media equipment, the information transparency, AVR for each colleges, concern on power house for instructional purposes, request for offering a maritime education for senior high school. For Dumangas campus, concern on lack of equipment especially in the HRT program; for Miag-ao campus, rehabilitation of the cooperative, equipment for the architecture program, equipment of TLE; for Barotac Nuevo campus, the renovation of library and science room. It was also recommended that graduate school facilities should be upgraded, extension of classes additional courses for doctoral and master’s degree program. A service vehicle for extension services in the main campus  was also requested.

All other concerns were documented and submitted to the administration for deliberations.