A Multi-Powered Drying System for Food Processing designed for all year round and all weather production of green seaweed- based food products of local residents of Brgy. Tiabas, San Dionisio, Iloilo was inaugurated on August 15, 2017.

The one million pesos project will provide uninterrupted income generated from the industry  even during inclement weather. It utilizes the solar radiation as its primary source of drying energy assisted with electric energy in an event that the solar heat is insufficient. It is also controlled and monitored using an intelligent electronic control system.

Mr. Florello Abines, USAID/STRIDE Technical and Development Manager, emphasized that the project was one of his favorites because it is presentable and sustainable despite of its low cost. He further encouraged beneficiaries to utilize the project and is optimistic to see more drying machines in the future. He likewise pushed for ISAT U to be an entrepreneurial university.

According to Dr. Carmelo V. Ambut, Vice President for Research and Extension (VPRE), the project was conceptualized by accident. The research team was heading to the town proper for a different study observed the abundance of the green seaweeds along the coastline of Brgy. Tiabas. However, the use of traditional drying system was noted. In the succeeding investigation, it was found out that the income generated from the industry was halted during inclement weather and the need to innovate the system was necessary. This situation prompted the researcher to submit the proposal to USAID, that, at the time offers to fund only ten selected researches. ISAT U proposal landed at number eleven in the ranking. By some twists of fate, one of the selected projects did not make it, giving way to ISAT U’s Multi-Powered Drying System for Food Processing.

Dr. Raul F. Muyong, ISAT U President, explained that the university does not only engage in instruction but also in research and extension services as well. The project is part of ISAT U’s commitment to its social responsibility. Dr. Muyong is also positive that the project would bring changes in the lives of the beneficiaries. “I like to see your products in the malls and markets soon, “he said. He also shared some secrets to the success of cooperatives, “be united and do not get jealous.” To support the local industry, Dr. Muyong gave the instruction that the seaweed food products will be sold during the university foundation week and will be part of ISAT U’s booth in its succeeding engagement. 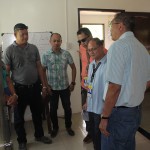 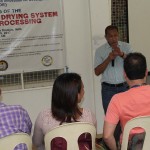 Dr. Florello Abines encourages the beneficiaries to utilize the full potential of the project and hopes that more drying machine will be produce in the future. 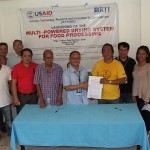 Dr. Raul F. Muyong and Fr. Robert Amalay present the newly-signed Memorandum of Agreement between ISAT U and MKK. 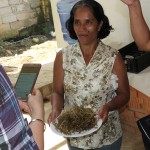 A local resident presents to members of media the green seaweeds which is abundant in the area. 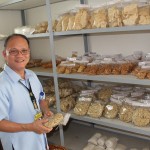 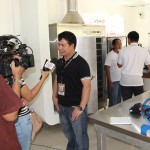