The colorful foot parade inside the school campus signals the start of PAHAMPANG 2016.

The rain did not dampen the spirits of sports loving ISAT U community and a swarm of colors representing the different colleges flooded the walkways of the school campus as the foot parade took off to signal the start of the PAHAMPANG 2016. Football in the rain at ISAT U football field.

The Pahampang was held to promote the physical well-being of the students and to inculcate in them the values of teamwork, unity, sportsmanship, cooperation and humility.

To magnify the value of excellence and determination, the school invited Iloilo Multisport Triathlon Team President Mr. Augusto P. Banusing, Jr as the guest speaker of the sportsfest. Born in Passi City, Iloilo, he defied physical odds and continued to move on and became a successful businessman and a sports enthusiast who  promotes goodwill to other people. Mr. Augusto P. Banusing, Jr. speaks before the student athletes on the opening program of Pahampang 2016.

A true and a spirited athlete, Mr. Banusing met an accident while engaging in a water sport at Villa, Iloilo and injured his leg.  After sitting in a wheel chair for a year, he struggled to stand up and show to the world that his handicap is not the end for him.  He engage in sports, mostly in athletics, and completed 22 marathons and triathlon events from 2010 to the present, nine of which were international competitions. The most significant race he has done was the “Run for Polio” fund raising event intended to support the campaign of buying vaccines for polio victims in Africa.

Mr. Banusing recognized the need to balance the mental and physical development of a child through sports. He added that the theme of ISAT U sports festival, “One Vision, One Mission, One Goal. . . Excellence through Sports” is fitting to today’s society. To excel in sports is a foundation of a good and solid character of a person in whatever endeavor he chose. It also trains the individual to compete not only his competitor but himself as well.  He added that people who engage in sports end up with excellent outlooks in life and display better leadership traits in his workplace. The air was filled with inspiration as he ended his message with a challenge, “only those who will risk going too far can possibly find out how far one can go.”

The College of Engineering and Architecture emerged as champions for this year’s sports fest. The College of Industrial Technology, College of Arts and Sciences and College of Education got the second, third and fourth places respectively. 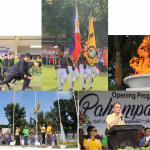 Clockwise from top left, selected students from CIT performing the Breakdance, the Colors, ,the Pahampang flame, Dr. Raul F. Muyong declares the Pahampang open and the hoisting of ISAT U banner. 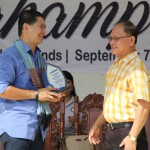 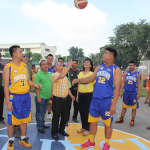 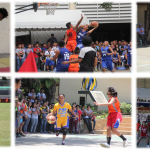 ISAT U students showing their athleticism in the different sports events . 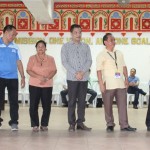 The giving of trophies to the winners of the different events. 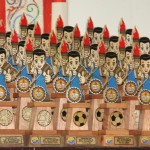 Trophies for the Pahampang 2016 were made in the Architectural Drafting Technology Department of the Bachelor of Science in Industrial Education, College of Education.