It’s no coincidence that these two visionary leaders got the chance to work together for a mutually beneficial endeavour that could better the lives of the community they are serving, listening to their people and taking into consideration their welfare above all.

Yes, you’ve read it right! DR. RAUL F. MUYONG and HON. RAUL N. BANIAS are partners in doing public service and were both born to be the modern heroes in this time. Public servants with a heart, indeed! 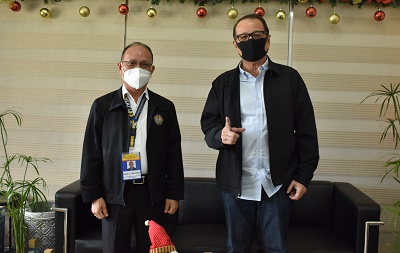 “We are not made Raul for nothing!” Dr. Muyong responded with a humble tone that captured the heart of everybody and made them even more attentive to what he was saying.

It was in 2018 when the partnership started and the same thread of thinking connected them and made the partnership even stronger and communication lines were kept open. The good mayor recalled that since before he had already an engagement with the institution because he took his ROTC in the fields of the then Institute and it is so refreshing to be re-connected with its amazing people again.

The Citizen Satisfaction Index System which was funded by the Department of Interior and Local Government paved the way for this incredible encounter and partnership – the heart of it all.

“Rest assured that ISAT U will be here for you and we are really happy to be of service!” Dr. Muyong is always open for more collaborations in the name of public service.