Sec. Fortunato T. De La Pena of the Department of Science and Technology (DOST) mentioned ISAT U’s Regional Yarn Production and Innovation Center (RYPIC) and the Understanding Lightning and Thunderstorm (ULAT) Project as among the DOST-assisted programs for Sustainable Development Goals (SDGs) of the present administration during the Regional Science and Technology Week at the Iloilo Convention Center on October 21-25, 2019.

“There are two major programs of the ISAT U, and these are the RYPIC, and then we will have very soon a ground receiving station for satellite images; we call it ULAT dito sa Iloilo,” Secretary De La Pena said. He added that ULAT will provide useful data for different agencies, “it is a receiving, processing, and transmitting information for remotely sense images for use by our national government agencies; it can be used for agriculture, environment and defense purposes.“ In his keynote address, Sec. De La Pena underscored the importance of partnership with HEIs in research and innovation. Science and Technology, according to him, plays a role in the sustainable development goals of the present administration. “From my own count, 13 (of the 17 SDGs), were we can directly contribute from the science and technology community,” he said.

ISAT U’s projects along with programs from other SUCs and private institutions were the contributions in science and technology according to the Secretary. The programs are the products of DOST’s efforts to reduced inequalities in research and innovations by partnering with higher educational institutions (HEIs).

The University is also involved in other DOST’s programs enumerated by Sec. De La Pena.  One of these is the agency’s initiative of smart cities and choosing the City of Iloilo as the pilot city in the Visayas. The University partnered with DOST to establish data science in this project.

To promote and encourage innovation and research, he highlighted the achievement of Ilonggo Dr. Ramon Gustilo for inventing the knee replacement design for Asian population, and the bio kit for rapid dengue infection testing (in an hour) and smart surface technology which won gold at Geneva Expo.

Going with the celebration’s theme “Science for the People,” ISAT U displayed researches, innovations and projects with has impact to the community, robotics and other science and technology products. The ceremonial launching of the ULAT was also one of the highlights of DOST-assisted projects.

After his message, Sec. De La Pena gamely interacted with the students. Three students from ISAT U received an early Christmas gift after answering correctly science and technology related questions from the Secretary. 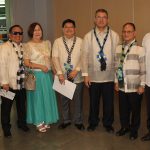 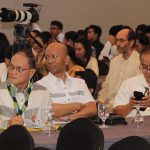 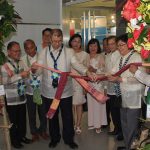 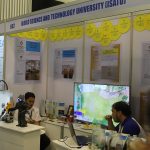 The ISAT U booth features researches that created impact to the community. It also displays science and technology products. 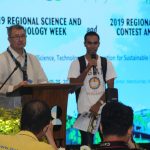 One of ISAT U students answers the question of Sec De La Pena and won a prize from the Secretary. 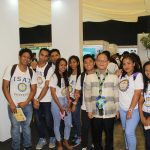 The students enjoy the moment with the university president as they explore the different exhibits in the week long celebration.