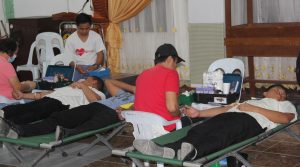 The Extension Services Division (ESD) conducted a blood-letting activity dubbed “Dugo Mo, Buhay Ko” at the New Board Room on February 24, 2020. A total of 21, 150 cc of blood donation was gathered from the the students, faculty and staff.

“Dugo Mo, Buhay Ko” started in 2007  in cooperation with the Philippine Red Cross (PRC). Since then, ISAT U conducts a twice a year bloodletting activity as part of its social responsibility.

The program has already earned recognition from PRC. In 2016, the university received a Platinum Service Awards for sponsoring mass blood donation for five consecutive years with a minimum cumulative total of 500 units donated. A Special Citation-Gold was bestowed on ISAT U on 2017 for conducting not less than five years of continuous blood donation program and has produced not less than 5,000 blood units.

Recognizing the demand for blood supply, the ESD pushed for the conduct of the activity. “We need more volunteers, so we campaigned to all colleges, the faculty and employees. The outcome is commendable,” said ESD Director Edrienne D. Veloso.